As you well know, I am a fan of traveling.  However, my vacations are rarely relaxing, with the exception of Christmas at in New York.  I don’t have to think about what I’m going to wear, because my mom just bought me all new clothes.  My nieces and nephews are home, so my siblings and I can totally be the 10 year olds that we want to be – with age appropriate cohorts.  I don’t have to change my schedule (my parent’s decided they could adjust to waking up at 10 and going to sleep at 2.)  And in a freak accident, my work password expired and I couldn’t change it remotely.  Boosh! (I learned that from Kevin.) 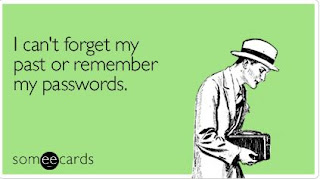 Monday I went down to Sean’s to play with Bailey, Jackie and Morgan’s new games and toys. Started with some Twilight Trivia, then we played Head Bandz (where you put a card on your head and then have to guess what you are) while Bailey made us her awesome pizza.  Finished up with Mario Kart and Glee Karaoke.  (Okay, Twilight trivia was my Christmas present and Bailey was straight up quoting passages, but still a really good time was had by all.) 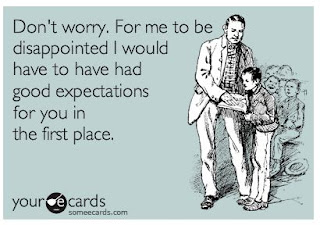 Then came “Disappointing Tiffany” Tuesday, in which I was doing all the disappointing.  Long story short, my plan to have some QT with Eva in the car on the way to Hershey Park, to hang out with Julie and Nick got messed up and everyone was disappointed in me.  I even tried to fix it on Tuesday morning, but failed miserably.  I even disappointed my parents because they wanted me to go play bingo with them, and I didn’t want to.  (Momela: Why don’t you want to hang out with us?) On the upside, I did get to hang out with Lisa (and her 3 year old son, and 2 adorable 3 month old twins) and Do and her kids at Mo’s house.  Lisa said at least I didn’t disappoint her.  Maureen decided that having twins would be so much fun because you could test things out on them.  Then she proceeded to put Chase on a white towel and Gavin on a spider-man towel, and then she put their pacifiers in front of them, to see which towel encouraged them to crawl.  They weren’t quite up for crawling, but Gavin did pull the spider-man towel until the pacifier came to him, so my baby won.  I hung out with Briana Tuesday night and while she was a delight, and hilarious even, I can’t share any of the stories with you. 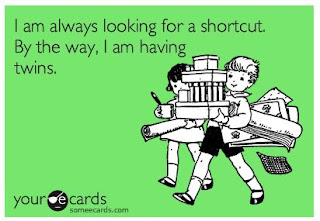 Wednesday I decided it would be a great idea to go Ice Skating.  I may have made a wild claim that it took 2 hours to get to the Palisades mall earlier in the week.  I was proved wrong when we drove to Bear Mountain (the 2pm session was already filled) then drove down to the Palisades and the entire trip only took 45 minutes.  Fine, Maureen. I get it.  But sometimes there’s traffic and parking is impossible… :P  Back to the story.  We went Ice Skating, and as we were leaving the boys were all complaining, which Mo summarized simply, “Kevin broke his hand, Kyle broke his butt, and Patrick broke his Spirit. Wanna go to Dave and Buster’s?”  On our way home:

Me: I’m a lil sleepy.
Mo: That’s because you didn’t have a red bull smoothie.
I honestly had no idea that was available to me, but makes perfect sense after surviving the winner’s circle.  Some of us had some tickets to exchange: 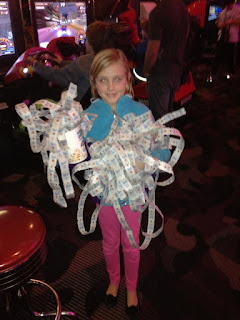 As I mentioned last week, I got a box of stuff from 5th grade from my dad this year.  Here are some highlights: 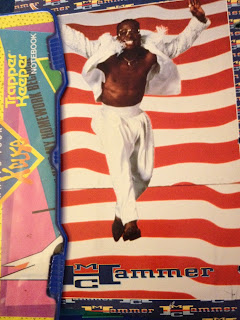 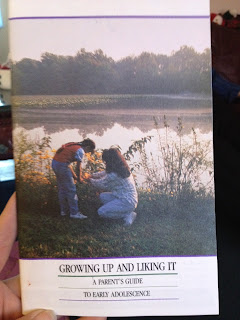 Thursday, Kevin volunteered to help take all of the Christmas decorations down with Maureen and rearranged the furniture.  When they were done, and Kevin was on his way to clean his room when he said, “Um Mom?  I don’t mind helping, but is there a reason why I have to work and Kyle and Patrick have been able to play all day?”  Maureen told him that no, there wasn’t, but she made a deal that if he cleaned his room, Kyle and Patrick would have to fold the laundry.  Kevin then looked at 5 huge loads of laundry on Mo’s bed and said, “Deal.”  Maureen later told me that her boys are the only ones, who can get hurt, not once, but three times, folding laundry.  When they were FINALLY finished with chores, I came over so we could play laser tag outside.  (Super fun.  Seriously.  I think, perhaps, Mo and I had the most fun though, because eventually we needed to replace my nephews with neighbor kids when our boys got tired of playing. )  Then, I went to dinner with Debina at Chili’s, came home, and then went back to Chili’s with Mo, Do and Sue.  Can’t get enough of two for one beers I guess.  Sue was telling us they had a mini-meltdown in their house during Hanukkah.  Day one, the girls were given their big gift, and then on day two, they opened up sweatshirts.  Sue said that her daughter Stephanie started crying, and when she asked her what was wrong, she said, “It’s nothing.  I’m just crying about a dream I had.”  To which we laughed and Mo said, “Yea.  She dreamed you got her a sweatshirt.” 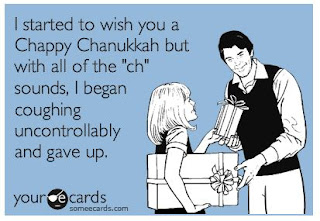 Speaking of shirts, I noticed that my 6 year old nephew was wearing the soccer jersey that I got him in South Africa nearly 5 years ago.  He said he thought that it might be the last time he could wear it because he can no longer fit his head through the hole.  All-in-all, a pretty good run. 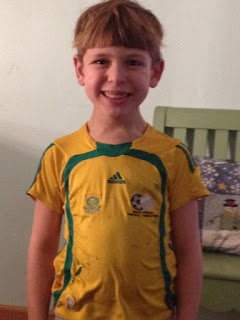 New Year’s Eve morning started out with a text from Mo asking if I wanted to play racquetball.  Clearly, I was going to say yes, but then when Mo got my reply she realized how comfortable the couch was.   But I had already agreed so we were locked in.  Picture the WORST racquetball players, and then imagine that they have the skills to teach us how to play.  At first I thought we just had to play us against the wall, but Mo assured me that was not the case.  Then I suggested we play zones, I would play front, she would play back – this was terrible idea.  I just hope the guys we kicked out of the court so we could play didn’t look back to see the travesty we were making of the sport.  As you can imagine, Mo and I were giggling for all 30 minutes and then it was someone else’s turn.  (The next morning, I noticed a HUGE and very deep bruise on my upper thigh.  As I pondered this, Mo suggested it was probably when I got hit by the ball.  That makes sense – but I totally need to go see a doctor because there’s no way we hit the ball that hard.) 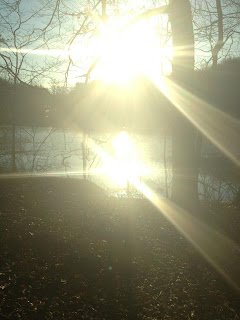 After that, we all went down to Sean’s for lunch and then both his family and Mo’s joined me on a walk around Tea Town Lake.  It was gorgeous, and I didn’t even need a jacket, on the last day of December (not that global warming exists or anything.  And not that I really understand what global warming is.)  At the end of the walk I snapped this picture, because signs are cruel (and funny.) 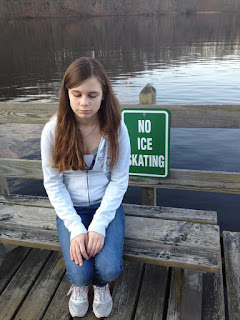 On our way down to pay a visit to Robin down the street, I took a picture of the neighbor’s house.  Earlier I had commented to my parent’s, “That’s a lot of crap on that lawn.” They didn’t think I was quite the right holiday spirit, but seriously, ammiright? 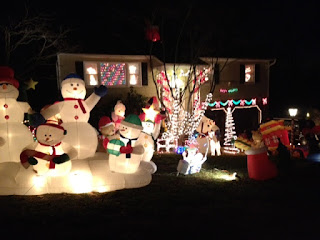 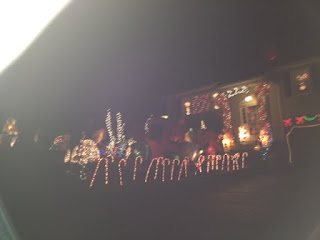 I had a totally low key New Year’s with take out and games at my parent’s.  Then I started 2012 off on the right foot.  It only took me ten minutes to check in and go through security at JFK on a holiday weekend AND I didn’t feel sick on the plane thanks to Mary’s suggestion of ginger pills!  I had so much extra time I checked out the book store in T5.  I don’t think they understand what “Children’s” means.  (But it sure is nice to see something I worked on on shelf!) 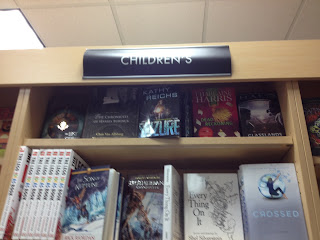 Posted by skcorynaffit at 9:17 AM