We are going to kick off this week’s fireside chat with an evening of Dr. Rach at Quinn’s in Capitol Hill.  I mentioned that I had put together a list of possible date ideas, including the indoor sky diving place.  Dr. Rach told me that one of her friends had been taken there to sky dive for a company event.  Dr. R: Yea, Basically they said, “Instead of Christmas bonuses you're doing this.”   And to think, my company just did a scavenger hunt.

We were sitting at the bar, when someone sat next to me and asked me a question.

It took me a couple minutes to stop giggling before I answered, “No he asked if he could put his bag here.”

After the bartender talked us into trying a “Scotch Egg” (http://allrecipes.com/recipe/scotch-eggs/ ), he then knocked over, and broke one of our glasses.  Dr. Rach and I spoke at the very same time:

My dad sent me something in the mail last week.  I decided to take a picture of it so you could fully grasp the situation: 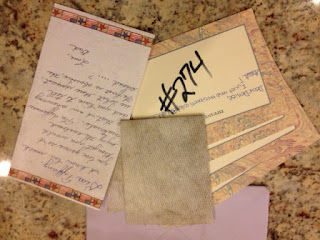 If you can’t read it, Frita writes:

Dear Tiffany,
I know how much you love games so enjoy the enclosed materials.  The difference is that I am showing and you have to tell us what these represent.  The first is obvious, the second….?
Love,
Dad

Yes, that is a half written letter from when I was younger to Denise.  Yes, I wrote to my friends about what books I was reading.  No I have no idea what #274 is (but I don’t think that’s my hand writing), and why yes, THAT IS A DIRTY RAG.   In both my attempts to retell this story, first to Dawne when I opened it, and then again to Rach over the phone, I could hardly stop laughing long enough to finish the story.  Love ya, Frita! 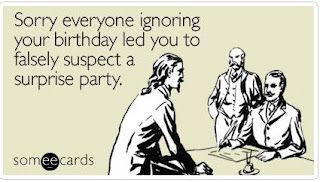 I was talking Roy last week, when he told me about what happened on his birthday (back in June.)  Apparently, going through the natural emotions of turning 30, Roy decided he was just going to meet his sister for dinner.  Trying to make it convenient for her, he chose Outback which was around the corner from her office.  She asked him a couple times if he was SURE that he wanted to go to Outback for his birthday dinner, but since it was just a low key dinner with his sister, he said it was fine.  When he walked into the restaurant, he saw his sister, but he also saw several of his friends also there.  Turns out, his sister had planned a surprise birthday party.  Afterwards, Roy said to his sister angrily, “I can’t BELIEVE you let me pick OUTBACK!! OUTBACK?! Really?” Something to think about when someone questions your restaurant choice, I guess.

This week, I also tried to send a “Baby Shower in a Box.” However, due to an Amazon user error, the Baby Shower in a Box, came unwrapped, without a card, and in 4 different boxes on multiple days.  Nothing burns my biscuits quite like a plan/gift of mine going awry.  My mom tried to tell me that it was the thought that counts, but my disappointment would not be assuaged.
What it should have looked like: 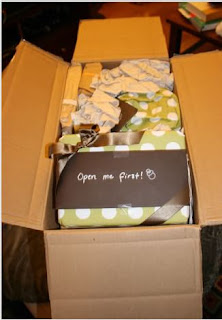 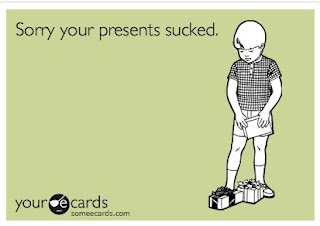 On Wednesday, I had an early breakfast with Becktoria, and then later in the evening, I went to my first story writing class (I skipped the intro class and went right into the advanced class, because apparently, I do what I want).  Then on Thursday I was so sleepy I went to sleep at 6:30 and for all intents and purposes slept until the morning.  As you can imagine, I don’t have any news from that particular evening unless you want to talk about a dream in which I brought Turbo Tax to an accountant and asked him to fill it out for me because I didn’t feel like it this year.

On Friday, Lucas had a gig at the Q Café.  When I came home, the living room and kitchen were covered in painted t-shirts and Dawne and Jordan were commenting on how high maintenance their youngest son was.

Me: I hope Lucas appreciates what I’m giving up tonight.  Becky is going to see “Beauty and the Beast” tonight and bringing along a sign that says, “Sing-along Section.”
Jordan: We’re missing Beauty and the Beast?! (Then to Dawne) I told you two kids were enough! 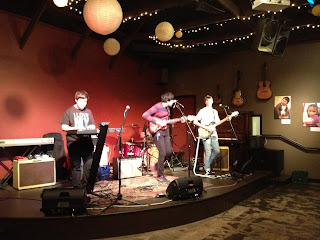 Not only did I get to see Jen at lunch on Friday, but I also got a text from her Friday night asking me if I was in Magnolia.  My answer? “I don’t know.  Am I in Magnolia?”  Turns out that I actually was, and she made a surprise appearance just as he was saying on stage, “You people need to move around a bit; you’re making me nervous.” Though she missed the earlier moment, before the concert, when Luke was talking to his friends, and his grandmother came over to him to show Lucas some art she took pictures of, and then to complete the circle, Jordan yelled, “MOM!” recognizing, and perhaps because of his own, embarrassment of the situation.  We had to explain that while we are required to be at all of his shows, we aren’t actually allowed to acknowledge is presence.  The next morning, recalling the incident, Lucas was laughing and commenting, “She’s a brave woman, my grandma.  She is comfortable in any situation.”  It’s so true.  Lucas also tried to tell the story about how the band almost died recording their one song (if you don’t remember that story: http://www.sweetandsarcastic.com/2011/10/rom-coms-with-fro-yo-up-ying-yang.html) but I’m not sure the audience really grasped the essential plot line.

Saturday, Dawne and I went to our Photoshop class, and then we thought we would go to brunch – but what ended up happening is we waited for two hours for Zach’s stuff to arrive from FL. When the truck did arrive, they parked 7 houses down, on the main road, on the opposite side of the street, in the middle of the lane, right before a curve.  When we mentioned this wasn’t the ideal parking space, they backed up a block, and stopped right in front of a side road effective obstructing entry to any car needing to get to their home.  The stupidity of these actions forced me to go inside, while the rest of the family enjoyed the Shady Russian guy demanding his money, and taking no responsibility for the obvious damages to Zach mattress and other belongings, as well as the 4 guys who were there (including one with two tear drop face tattoos) but weren’t actually there to help move anything out of the truck.  I could see how someone who had eaten that day might have found this situation hilarious, but that just wasn’t me.

We did eventually have brunch at 2:30, after Diana had joined us, at IHOP.  We were talking about how violence has gone down over the centuries, and even with WWI and WWII, last century was the least violent century we’ve had – Per Capita that is.  Lucas quickly replied, “But we have a lot more per capita’s though.”  I guess that’s true too.  : )

Diana also told me about the “sock bun” which I haven’t tried yet, but will.  I would have tried it right away, but I mentioned I was going out later that night, and just in case it failed miserable, we decided to wait on the experimentation.  In case you want to try it simultaneously: 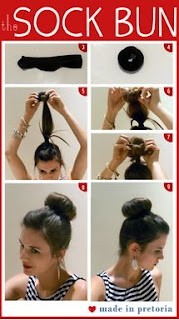 Saturday, what we do instead of cooking in our kitchen: 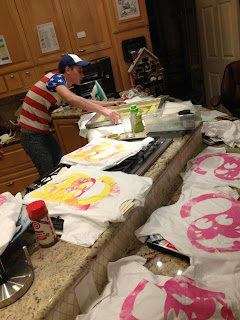 Zach: are we going to snack on something for dinner?
Me: sure, as long as you don't need the kitchen.
Lucas: especially the Stoval area.

Speaking of socks, Dawne at one point on Sunday, was sitting in the living room, and announced, “I can’t believe I am so lazy, I can only put one sock on.” 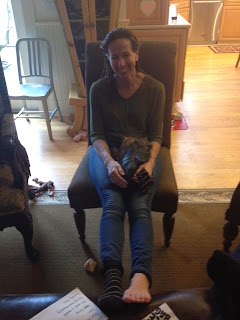 And speaking of home remedies, Lucas asked me to tape a broom to his back to fix his posture. Happy to help: 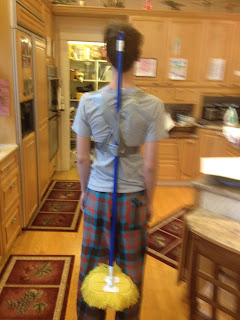 I also couldn’t help taking a picture of this family bonding moment.  (Not sure, but this might be the worst red-eye I have ever created.) 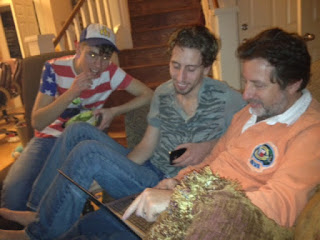 And we went to Target to get some room organizing items, and I turned around and Dawne and Lucas had spent 10 full minutes deciding which “dog toy” to get before deciding on both. 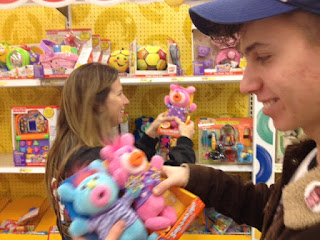 I am going to sneak some “Sweet” into this “Sweet and Sarcastic” update.  I heard Josh Groban’s “You Raise Me Up”   today on the radio.

This song has a lot of emotional connections for me because my Grandma heard Josh Groban sing it after my Grandpa died and she asked me for the song.  Not for Josh Groban’s album, just this song.  She said she immediately loved the song because it reminded her of Grandpa, that even though he was gone, he was still “raising her up” to be more than she could be.  I’m still convinced that while Grandma was nearly 100 when she died, that the real cause of death was a broken heart.  Like that couple who was married for 75 years and died 6 hours apart, my grandparents had a love to be envious of.  And when I hear this song, I always think not only about Grandma, but about how together, with their love and example, they push us all to be stronger then we could be on our own.   I hope you all have had someone in your life that has “raised you up” and continues to raise you up even from a far.  - Much Love -

Posted by skcorynaffit at 4:01 PM