Maureen was still in town, but unfortunately, I had to go to work.  Dawne & Aunt Pat took her to the club for a spa day.  When I got back from work, my cousins from Seattle, brought my cousins from Chicago, Billy, Colleen & Daphne to the house.  We had a little BBQ.  It was far too brief, but as I was sitting there, laughing and enjoying their company, I realized sitting in one room we had 4 sets of siblings from one family - and what that reminded me of was, we really like hanging out with each other. At this point in our lives, there is no obligation - even holidays have options.  But on Monday, 4 sets of siblings chose to be together - and we had a most enjoyable time, which is pretty special.  Far too soon, I needed to drive Mo to the airport, but man, did I have a great time while she was here.

The pups have continued to be incredibly diligent about keeping the ducks the hell off of our water.  Casper gets into the thick of it, and then Percy either gets down in the trenches with him, or he decides to guard the pool water from above.  So protective. 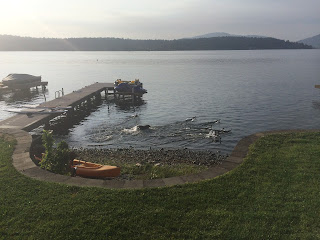 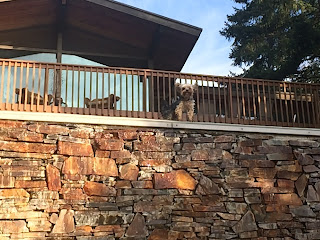 Plus, it was uber lovely to have a week of awesome before kind of a brutal week of work with insane hours, all of which required me to be on my game.  One evening, I was out at work with a bunch of partners and co-workers, and one particular comment made me laugh real hard.

Co-worker: Many of you are in relationships with people who are only in relationships because they can't do any better -  that's a thing right? Yeah, my wife is super angry with me right now.

Not that I can complain, it was a very productive week, plus look, someone made me a cookie: 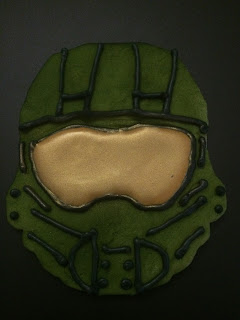 On Friday, when I was finally able to come home before midnight, I also got to see the fam a bit.

Lucas: I have very good news. [At Red Robin] Buzz Clucks and Mac and cheese is finally a menu item.  If it came with a cherry coke it would be called the Lucas even though I can't eat it any more.

Lucas had told this sweet kid that he would help him with screen printing shirts.  Basically, he told him he would screen print a bunch of shirts for him.  Originally, he thought he could use the screen print at the teen center, but the teen center was closed unexpectedly.  So instead Lucas was left to do them himself.  Lucas didn't actually have a screen press, so Uncle Ray and Lucas had to build one from scratch.  Scratch being an old dresser that they were going to throw out but instead used for parts.   Once it was made, Eliza and Arda stayed up all night doing one two of the prints, but apparently, the design that the kid (who was not helping) wanted was 4 color.  Dawne and I volunteered to help Friday night, despite what a long week it was.

Jordan: I'm going to go to bed early.
Me: Whoa, didn't you get the memo? We're screen printing tonight.
Jordan: R.H.I.P.
Me: Excuse me.
Jordan: Rank Has It's Privileges
Me: um, yeah, are we talking about the hierarchy of how much we love your son here? Because we're all tired but some of us love him enough to lose some sleep.
Jordan ended up staying up to watch TMNT while Dawne, Lucas and I made the shirts, I guess that helps.

One of the shirts had red on it, and even though you could barely see the red, ink, it was technically unique.  Apparently, when Arda was helping he kept calling any shirt that had a mistake an exclusive.  And let me tell you there was many a cause to exclaim, "This shirt's it's an exclusive!" 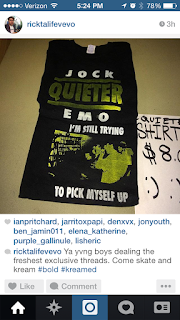 On Saturday, Lucas had his big show.  Not one he was playing, but he had organized the whole event which was pretty cool.  That evening, he packed up all of his stuff to prep for a nice road trip with Eliza down to school.  We had one last dinner at Subway, after trying to pick up his car from the dealership / getting his oil changed, and being totally denied.  Man, I'm going to miss that kid.

Kelly and I went to the Sounders game with Dr. Rach's tickets on Sunday.  I scored rock star parking again, only this time, I skated passed some cops to park for free behind an SUV.  And because I'm so tiny, I totally got away with it, for free even.  The game was hoppin' because we were playing Portland.  I don't know if you can see it in the pic, but one guy on the Portland team is so Portland, it's scary. 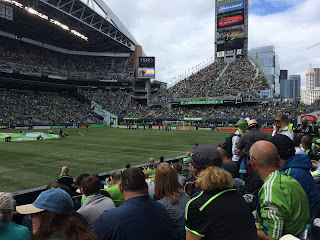 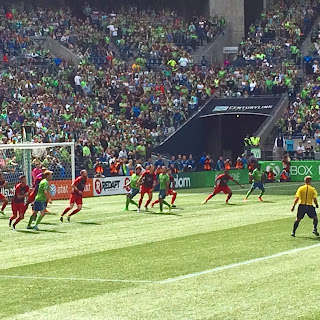 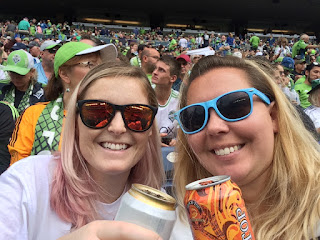 And that wraps up another issue of the life of me! Thanks for reading, Buddy!

Posted by skcorynaffit at 11:27 PM