On Wednesday evening, Dawne, Jordan, Becky and I grabbed some KFC & the pups and went to Marymoor to watch Dirty Dancing.  There is always trivia before the outdoor movies, and during this particular round, Becky learned that Patrick Swayze did non-romantic movies.  Becky, "I just know him from Dirty Dancing and Ghost."

Becky thought ahead and brought "juice boxes" of wine and chocolate, so it was basically and awesome evening. 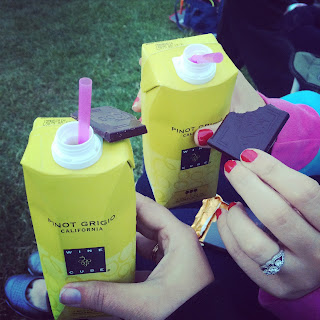 I spent the rest of the weekend at Home Depot, so I guess I really am a home owner now. I had bought tile for my place, and then I had no idea how to get it from Home Depot to my place.  After having breakfast for dinner, Dawne and I decided that come hell or high water we were going to get that tile to the condo.  We metaphorically rolled up our sleeves, and headed over to the counter thinking that maybe we could just a bunch of little trips back and forth until the job was done.  See this is one of the reasons why Dawne is awesome.  She knew that we were in for a really long night of driving and carrying heavy things and she was all in.  That's why it was even sweeter when we asked if they delivered, and Home Depot said, "yes!"  Because we just gained back all this time, we ended up doing a bunch of other chores... like emptying the keg from Fourth of July that I had totally forgotten about.  After we dropped that off, and picked up a bunch of plums from the plum tree, we loaded the car full of trash to get rid of it too.   All in all, an incredibly productive evening. 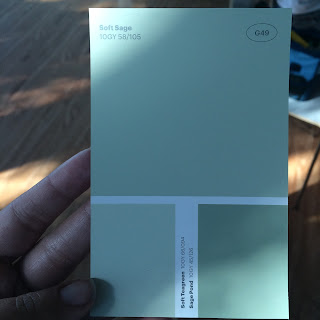 Friday night, I ended up having to choose the paint for my place all on my own.  I have no idea if I choose wisely, but at least I made a decision.  I got it in my head that I needed to paint the entire unit before Monday, so I called in some reinforcements.  Becky and Kelly's mom Bev showed up early.  We started painting, and then the tile delivery arrived, and I ended up having to carry it all from the truck to the condo, but at least I didn't have to drive it.  The delivery guy was really angry at me for how hot it was.  Sorry?  Meanwhile, Becky was and Bev were serious rock stars.  Then Dawne, Jordan & Lucas showed up - and boy am I glad they did because I was doing everything wrong.

As we were painting the popcorn ceiling.
Bev: That's going to look so much better for when you put your glow in the dark stars there

Becky was telling me all these painting rules that she learned from dad.
Me: Oh man, I just got paint all over my shirt.
Becky: Paint with your brush not your boob.
Me: Is that one of your dad rules?  Because too late.

Becky left a little extra behind. 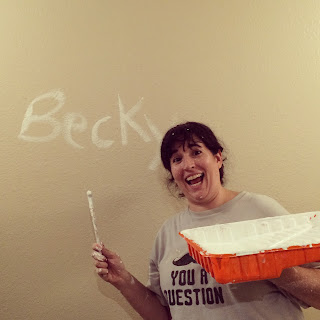 The following day, after another trip to Home Depot with Uncle Ray, Kevin called me and told me all about his leadership week.
Me: So what did you learn?
Kevin: We went to see the MLK monument and part of it wasn't done.  I asked my teacher why and she said it wasn't finished because there is still racism in the world and that's what I learned.
Heavy, but true. 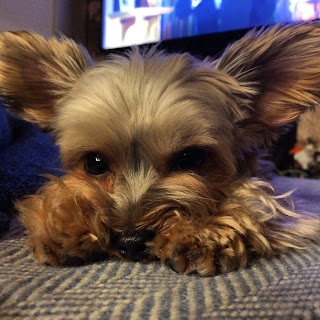 Hope you're having an awesome weekend! More soon!

Posted by skcorynaffit at 11:36 AM