That time I saw the Violent Femmes

Still trying to catch up, so it's still a bit fuzzy, but I'm too neurotic to combine or skip updates, so just bear (bare?) with me. 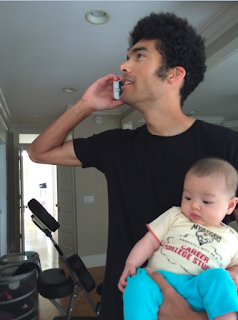 Erika and I were chatting and she told me that her babies are beginning to pick up on some of her phrases.  This is both fun and funny for me because they aren't quite getting the meanings and I am not the one influencing their discourse.  For example, Xavi was taking a bath and Erika decided it was time to get out and go to bed.
Xavi: Mom! I was having a friggin' good time in there!

Maureen got a phone call during the day from the boys’ vice principal to inform her that Patrick was in her office because he said the F word.  Basically, the VP was very impressed that when Patrick came in, and she asked what he was in there for, he honestly answered, “For inappropriate language.”  Later, Maureen was talking to Patrick, explaining calmly that he shouldn’t use bad language.
Patrick: I know.  You shouldn’t even say things that sound like bad language.
Mo: Well, yes.  I guess that’s true.
Patrick: Yea, because I got sent to the vice principle today for saying “What the fuzzy?”
(Sorry to drop the F-Bomb on you guys.)

Dawne has been diligently keeping our ducks alive with Cheerios whilst the pups actively try to scare them off yelling, "GET OFF MY WATER!" 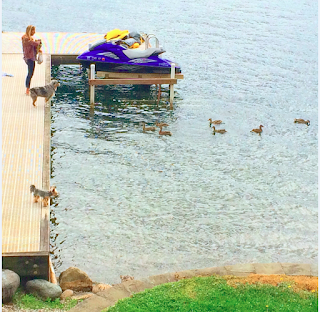 So this week was filled with removing all the carpeting in my condo to find a lot of mold and rot which is super fun.  Obviously, the project got a little more expansive.  I just wanted to put tile in and MAYBE paint! (This is what Dawne has had to hear me say at least twice a day and at a very high pitched voice. That's right folks, I am a delight).  As you can imagine, my week got gobbled up pretty quickly, and not by anything that was wildly amusing.    I did get a new vanity though, look how pretty! 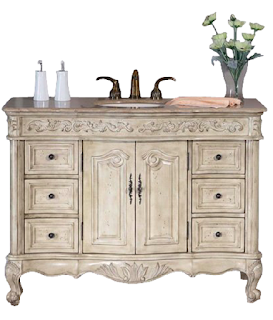 Sometimes it's hard to tell who the parent is around here. 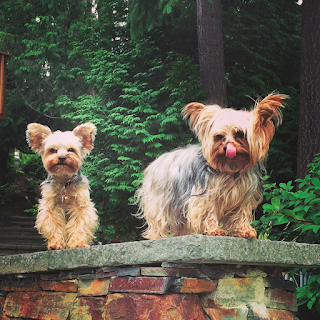 We all decided to do some crafts because Lucas bought those little melty bead things from IKEA for like 5 bucks.

After seeing Zach go online and get an 8-bit image of Zelda.
Dawne: Are you doing the same thing?
Lucas: I don't copy anyone.  I'm doing Mega Man. 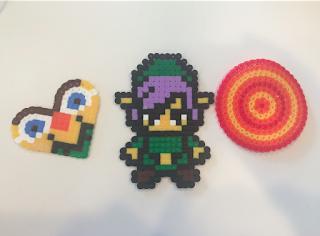 Dawne: Lucas is down there playing the piano when he has to leave but if I went down there...
Me: He’d be all, “Why are you making me feel bad about doing the right thing??”
Side note… I feel like I messed this conversation up, but I don’t know how to fix it.  Welcome to the hell of trying to make updates from 7 weeks ago!  Kathi just sent me a note telling me that she and Hendrik couldn’t figure out a rail ticket from 4 weeks ago.   Which reminded her of “Serial” and not being able to remember what happened on a particular day a year ago… and the long and the short of it, is, it’s v. v. difficult.

Lucas: I’m bringing everything from Metallica to Beach Boys.

It's pretty typical for me to want to go to the dog park, especially on the weekends.  Obviously, having human company is even better, so a lot of texts start with, "Dog Park?"  Here is how they generally go:

Kelly: I was thinking about getting back in bed
Me: That's an option if Bev doesn't answer

Bev (Kelly's mom): I think we are. Piper is with us, idk what Kelly's plans are for today.
Me: Okay, well if you have Piper than we don't need her.

Here's a little video of Percy and Nala wrestling on the pool.   It's like a big waterbed of fun.
https://youtu.be/M-k3w5eJVjw 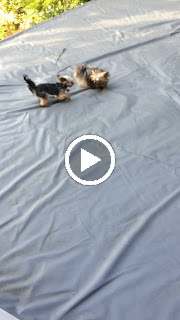 And here is some proof that pups do in fact see their reflection.
https://youtu.be/Wl1jTMS_j2U 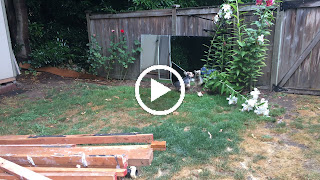 On Sunday, I found out at the last minute that Violent Femmes were playing at Marymoor with the Bare Naked Ladies.  Back when I was around 6, Maureen & Cristi would drive me in the Chevette to pick up Deb & Chris to take us to Ben Franklin summer camp. On the way they would blast the Violent Femmes, singing at the top of their lungs and when Add it up came on, they made my friends and I all cover our ears during the cursing bits. That summer began my lifelong love of the Violent Femmes.  I was so excited to see this concert - they were totally everything I hoped that they would be.  The BNL were really fun too.

Posted by skcorynaffit at 1:30 PM