Monday, Fun Day.  Is that saying?  Well, I didn't mean it any way.  I invited my HOA over to my new place so we could talk.  Then I went to the bakery and asked them to put enough good vibes that whoever ate them wouldn't want to sue me.  The baker laughed, and then I said, no seriously.  So she worked some magic (or pretended to for my benefit.)  Then I went home and waited for my visitors.  Long story short, the arrived, ignored my presence, spoke among themselves, about me and my home as I wasn't there and then made a proclamation and left.  No one ate my cookies.

Then I went to work for 2 1/2 more days before flying to Dawne's in Long Beach for a super fun Halloween themed weekend!  Lucas volunteered to pick me up which was really nice of him, even kinder when it ended up taking him longer to pick me up than it did for me to fly there.  Rough.  So I rewarded him by buying him some Taco Bell.   Then we reunited all the pups and they were sooo excited! So we all basked in the glory of being together and watched a documentary about John Denver. We tapped off the evening by a late night chat as we had a sleepover followed by falling asleep to sounds of the ocean crashing.

We woke up the next morning, took the pups for a walk and had breakfast at the café that Dawne call's "Her Kitchen." Oh, and here are plates that down for her apartment, I guess to look at… but super cool Haunted Mansion Disney Plates! 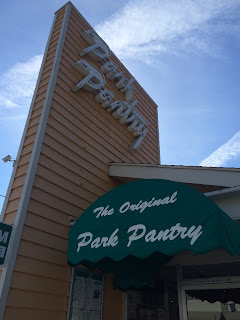 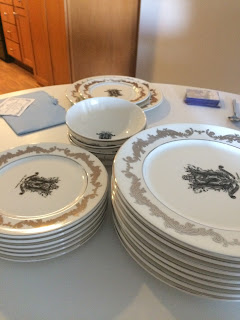 Then we did some tricks with the pups in the park with bacon before heading back so that Dawne could go to the doctor and make sure she isn't dying (that's basically why she goes to all doctors.) Meanwhile, Luke and I watched a documentary about Keith Richards. We decided to get out a bit after that to walk the pups, which is where Dawne met us and then we went to do beach and walked some more there.

Dawne: Your dad just came up with the most awesome idea.
Me: My dad? That's great. Why didn't he just call me?

The great idea was staying at Disney that this swanky suite on Saturday night, waking up at the park and going to Disney. Yes, please!  But first, we needed to drop off the pups at day care, and pick up Zach and Nater at the airport.  We were going to meet at Disney and then go to Mickey's Halloween Party, but we didn't have tickets to the party, so we just ate dinner at downtown Disney and headed over to Knotts Scary Farm.  We had a lovely dinner together in which all of the discussion was around religion and politics - my absolute favorite!

Lucas: Sometimes you beat the burrito, sometimes the burrito beats you.

Lucas: I got in!
Zach: Great, you got into the school that never lets you out.
(I think 6 years is the average duration actually, so they do let you out... eventually.)

Zach: If you think about it, trick or treat is teaching our children the mafia mentality.

So we go to Knotts Scary Farm, and went through the scary mazes, and Dawne, Lucas and I screamed as loud as we could all the way through the maze and Nater laughed harder than I have ever heard him laugh - at us.  Part of my was annoyed, but the other part was so happy to see him filled with such joy.

There was a father and daughter ahead of us and the daughter was giving her Dad a hard time about not knowing enough about teasing and unteasing your hair.
Lucas: To untease your hair, you just apologize a lot.

Me: Snoopy must be a licensor for this park because there are Peanuts everywhere.
Lucas: Yeah, and I'm allergic.

At the end of the night we decided to get a drink, and opted for "Purple Drink."
Lucas: I'm surprised there isn't more Jam themed things.
Me: Why?
Lucas: Knots berry farm

I think I thought this was hilarious because it was 1:30 in the morning.  Boy am I thankful that Nater was willing to drive us home.

The next morning, we went back to "Dawne's Kitchen" for breakfast and afterwards took another lovely walk on the beach and Jordan's cousins stopped by for a visit.  We had to skedaddle before we knew it.  We were going to stop at Walgreens to grab snacks before heading out for a day of sailing.  In order to all fit into the car, Dawne had to sit on Luke's lap.

Dawne: Okay, when we get there, everyone grab something you like.
Me: Wheel good fun, get it like real good fun?
Nater: You know how I feel about puns? Real good puns are great but bad puns are also great.
Lucas: I know it's not appropriate to say, but mom you make we weak in the knees (sitting on his lap).  Actually, we should all grab something we don't like and maybe it'll be something someone else will like. 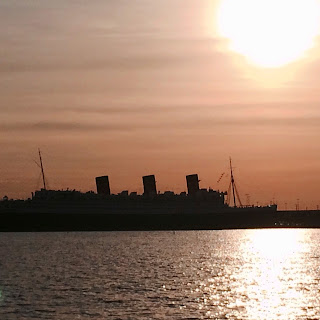 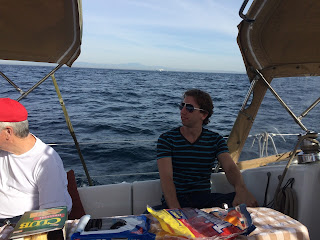 There was a guy on the sailboat that made puzzles.
Dawne: Is 1000 a lot for a puzzle?
Zach: The lowest is 500, second lowest is 1000 for adult puzzles... Yeah I used to work for a store that sold puzzles.

Nater: What is the difference between a war ship and a battleship?
Me: One is actively engaged in war...
Lucas: And the other is a board game.

We had dinner after the seriously awesome day on the water and then it was time for Nater, Dawne and I to go the Queen Mary and be scared all over again!  This is when we really should have splurged for the fast pass because there were really long lines.  I don't know if you've ever been, but the Queen Mary brings scary haunted to the next level because it is actually haunted. 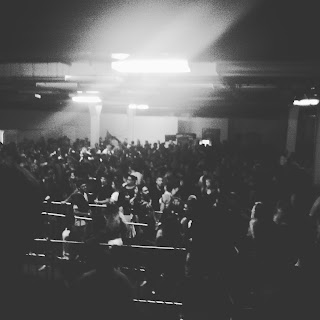 We walked out of there around 1:45am so we got back to the apartment a little after 2, and Disney at around 2:30.  I'm not going to lie, I was sleepy, and a cranky which was unfortunate because we were at the most magical place on earth and I was all whining and pointing saying, "I wiiish I could appreciate all of these awesome things!"  When we got the suite Nater rang the doorbell and giggled.  I got to the door and said, "Nater! It's 2:30 in the morning! You're going to wake everyone up!" But then I rang it anyway, and it sang, "Yo ho, yo ho! A pirates life for me!" and I giggled.  And so Dawne rang it again and we were all in fit of giggles.  The other 3 times were just cuz. The kicker is the suite was so big, that we ended up having to call Jordan because he couldn't hear the doorbell. 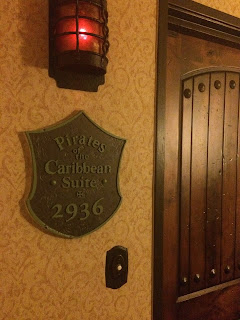 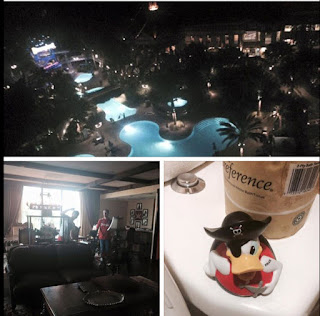 The next morning, I asked Zach what time it was, and he said it was 10, so I got up immediately and got ready for a day of fun.  We ordered breakfast, which took a little longer than expected.  I also found out that Zach totally lied to me and said it was later than it was so that I would get up, isn't he adorable!? 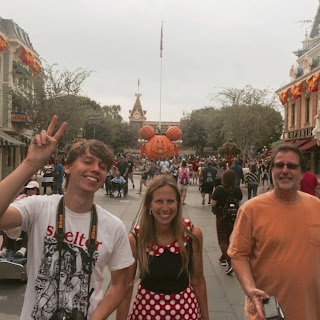 We got a couple of great hours in at the park, and it was all decorated for Halloween and we all laughed and enjoyed the moment. While waiting on the Haunted House line...

Lucas: Do you know what this instrument is?
Us: We named every instrument we knew.
Lucas: Nope! It's a Celeste.
Us: How do you know that!?

My Fam, too cool to pose for a picture. 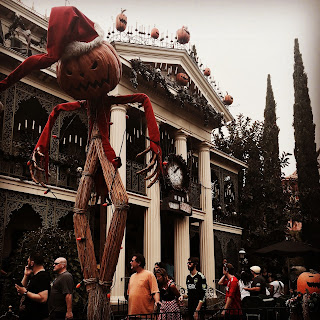 Lucas: One might say it was Dawne - ting
Nater: This has been a lot of pun in one weekend.

The boys stayed at the park and Dawne and I went to pick up the pups.  We dropped them off the apartment and ran over to meet Elan and his lady friend at Universal.  We had dinner at Bucca di Beppos, where I saw a little kid while we were waiting for a table.  He said, "Hey! I play Halo.  Only Reach though." And I swear if he had a mic, he would have dropped it and walked away.  On the wall there was a cake on the wall.

And he did, and I taped it.
https://youtu.be/GFSSdsLaZAs

If I thought Knotts and the Queen Mary were scary, that was nothing compared to Universal.  When we walked in, we were chased buy guys with chainsaws.  I felt something on my face, it was probably water, but in the moment I said, "SOMEONE JUST THREW ACID IN MY FACE!"

Lucas: Your attire is going to make it easy to spook the spooks.
Me: This has to be a the safe area.
Lucas: Definitely, no ghosts.
Me: I mean we're near a cop car in the Simpsons.

We went on the Mummy, which I love.  There was a "Child Switch" and Lucas asked, "Do you think my parents will swap me?" Then followed the group down a path.

Me: This is sketch. Were just going to get on the tram without knowing where it goes?

Everyone ignored me, and we went on the tram anyway.  Then we went on these scary mazes, after being chased by more scary things.  I don't even like to watch Walking Dead never mind getting to be on the set! Oh, and did I mention that Elan likes to walk slowly through the mazes so he can really experience every moment?  I was so freaked out by the third maze, I called it quits and took Lucas to the Simpson's ride and got a really gigantic donut.
Me: How do we get to the Minions ride without getting scared.
Lady: Yeah, that's not possible.
Me: Okay what's the fastest way to get there. 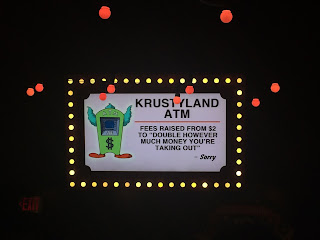 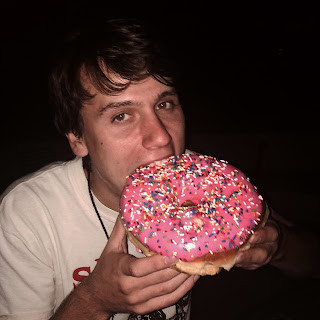 Then we ran through something called "CorpZ" It was getting close to midnight and I had to get up at 5 am, so we all decided to do one more thing.  Instead of doing a something terrifying, Lucas and I went on the Jurassic Park ride.  Before getting on, Luke asked if I wanted to get a poncho, and I said, "No.  We are just going to be wet and miserable for the next three hours." But we were fine, and before long I was thanking Nater for the third night in a row for driving me home super late.

Seriously, I don't think anyone has ever tried to fit as much fun into three days - Halloween hilarity at its finest!  But next year there will be even more fun! 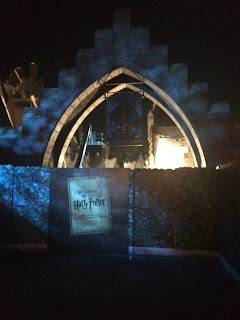 Posted by skcorynaffit at 10:23 PM