Digging myself out of my writing hole!

The last thing I did before the holidays was to pack up the office for the move from Kirkland to Redmond.  I know the cement building that looked like it was made for a safeway or ace hardware or bowling alley (depending on what legend you believed) didn't have windows, and it was always a little cold, and dark - but I loved the history that was made there by so many before me.  I loved that it was weird, even though I hated running back and forth between buildings all day.  I had many desks in this location, but our last location was up in the "loft" and it's what I'll remember, mostly because I actually took a picture of it. 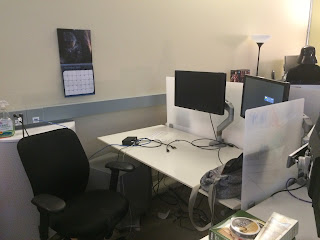 I almost bought this guy as gift this year because heh. 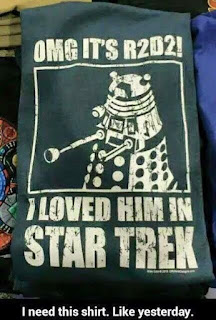 The week in NY started with celebrating Sean's birthday.  I got him a "Guitar for Dummies" because I remembered that he had jokingly asked for a Guitar at Thanksgiving.  I knew it was a risk, more with Stacey than anything.  I mean I lived through Lucas learning the guitar and it was painful.  But at least this guitar came with a tuner.  Jackie said she wanted to do a Dirty Santa the following day.  It was short notice, but I accidentally brought 12 extra presents with me, so I said sure, why not?  She also told me that when they decided to do a Secret Santa with Stacey's family, Jackie for some reason thought they were supposed to get a gag gift.  I'm kind of sad I wasn't a part of that one. 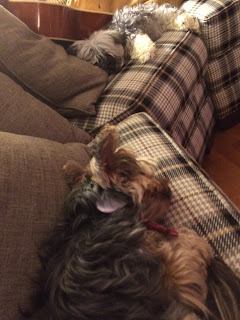 We had an epic Christmas, as always.  My mom totally out did herself and we were completely spoiled.  I did my traditional stacking of the presents in which each pile is for a different person and is in front of them, but looks like one big pile.  Which also means I get to choose the seating, so I put myself next to Jackie this year. 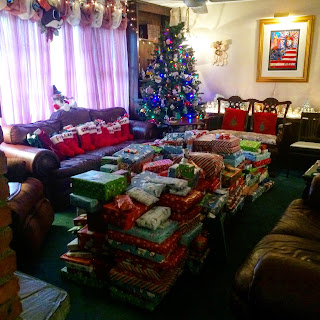 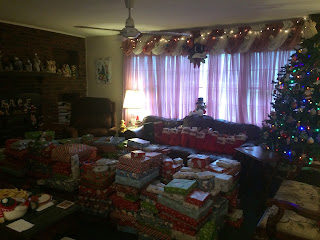 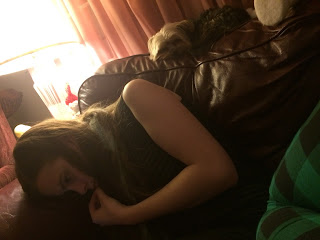 Stacey: I've brought Morgan to the doctor several times for her leg.
Morgan: Mom said if I was a horse she would have taken me out back and shot me already. She told the doctor that. 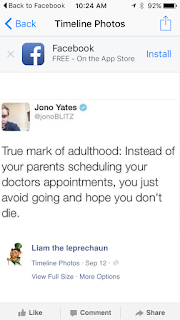 Sean opened a classic "Love Frita" present to find the Odyssey game he had pulled down from the attic when we put the decorations up.   With that and the Guitar he was having quite a good week!

During the unwrapping, a package from Amazon arrived.  It was a present for Jackie, so I took some used wrapping paper and just folded it around the present and put it in Jackie's pile.
Me: You'll just have to know it's from me.
Jackie: Not sure how.

Kevin: I'll trade the socks for the kindle.
Patrick: No, I won't.

Stacey's dad and sister Carla stopped by mid unwrapping.
Carla: So what did you get?
Jackie: Well..........And Tiffany got a stain!

Choosing a Fanny May
Me: Aren't you nervous about picking one with peanuts?
Jackie: I love my life. Yolo

Sean: Kevin's new name is Beast of the East. 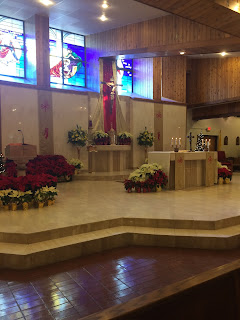 Patrick was an alter server at Christmas mass, and then we went over to Maureen's for an awesome dinner.  After Christmas, Carla and I hung out with our nieces.  We did our usual eating all day with a smattering of games.  At the other Christmas, Morgan and Jackie got into an argument with Carla about who had the best Hot Chocolate.  Now, I am a bit of a connoisseur when it comes to Hot Chocolate goes in Westchester, so when they told me we had to go to Dunkin Donuts and Starbucks to settle this, I was all for it.

(Dunkin Donuts tasted like it came from a packet, which is the only reason why it beat Starbucks btw. )

Then we went to Lil Sorento's for dinner.  This is when Morgan dropped a mozzarella on the floor, pick it up and proceed to take a bite.
Carla: Morgan! Are you eating floor mozzarella?!?
Morgan was laughing so hard she got distracted and then dipped her floor mozzarella in the communal sauce.

Carla had asked Stacey about the Santa situation in the house.  Bailey is 17, Jackie is 15, and Morgan is 13.  Stacey keeps all of the presents in the weight room.  When Morgan saw Jackie go into the weight room, she was so worried about the secret being spoiled she ran to Bailey and asked, "What should we tell her?"

I think that’s a wrap for this week... More soon!

Posted by skcorynaffit at 12:00 PM